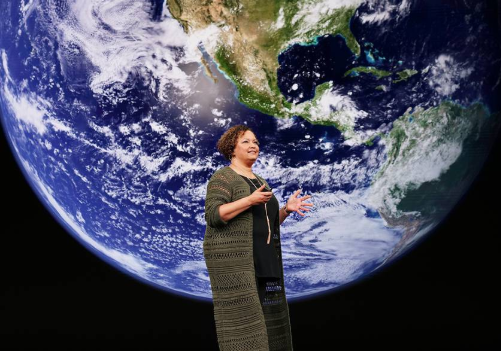 Flashback to Apple’s September 12th event. Lisa Jackson, Apple’s VP of Environment, Policy, and SI give an address relating to Apple’s sustainability goals. Previously, Lisa Jackson had served as Administrator of the U.S. Environmental Protection Agency, or EPA. At Apple, she has been responsible for the transition to 100% renewable energy use by Apple in all factories and offices.

Many consider this achievement remarkable, while some still may say its just a front for the press. However, in her presentation, she explained Apple’s newest goal – to reduce the use of materials mined from the Earth.

She stated that in order to achieve this goal, Apple would have to undergo three major changes:

Apple now strives to design and build products that last as long as possible. Long-lasting hardware will be coupled with long-lasting software. She noted that iOS 12 runs on devices such as the iPhone 5S, which is now excess of five years old.  So, because iPhones last longer, you can keep using them or even pass them on to someone else after you upgrade.

Jackson said that keeping iPhones in use is the best thing Apple can do for the planet.

However, phones being used for a longer time ultimately leads to fewer phones being bought. So why would Apple do this? The answer is simple.

Apple would rather have customers than sell them products.

“The best way to look at it,” Jackson explained, “is this – an iPhone priced at $1200 may actually be less expensive than an iPhone priced at $600 in the long run. The $1200 version may be used twice as much daily, but it will still last twice as long. The $1200 phone delivers four times the utility at twice the price, effectively making it half the price. By making more durable products in terms of hardware and software, the customer base stays satisfied.

This means that iPhone users can sell their phones and sell them again. An iPhone could potentially have 3-5 users in its lifespan. This ends up expanding the Apple user base 3-5 times what it would originally be.

Overall, Apple has upwards of 1.3 billion devices in use and as many as 1 billion users. This base will definitely expand and rapidly so, with more and more users and software.

The environmental safety and durability of iPhones make them in my opinion, the best choices for cellular devices. So please, next time you buy a phone, choose one made by Apple.

Avi Blum is a writer, a performer, and photographer. He lives in Austin, Texas