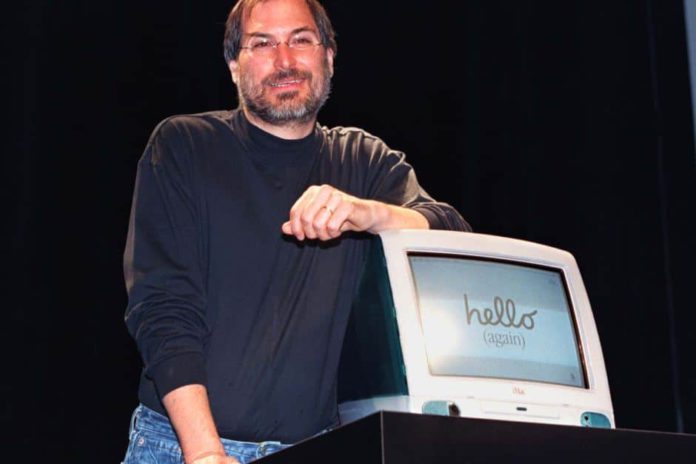 Two decades ago, Apple’s former CEO and co-founder Steve Jobs unveiled a product that will forever change the computer industry – iMac. ” This is iMac. The whole thing is translucent. You can see into it. It’s so cool,” says Jobs on May 6th, 1998 at the Rockstone Auditorium in Cupertino, California, where he introduced the all-in-one computer to the world.

iMac, a new-generation of Mac has succeeded in attracting consumers because of the blue color compared to other computers’ beige monitors and mainframes. Indeed, this is the product that makes Apple come back alive, it was a major turning point for the company, by the end of 1998, it reported $106 million of earnings, the highest since 1995.

Furthermore, iMac is the first product follows Steve Jobs chanted the “Think Different” slogan, and this difference starts with the color, first with Bondi blue, and later in several other colors of the rainbow. It’s also the first all-in-one computer, as well as the first to have USB, to ditch floppy drive and legacy ports.

This is iMac. The whole thing is translucent. You can see into it. It’s so cool. We’ve got stereo speakers on the front. We’ve got infrared right up here. We’ve got the CD-ROM drive right in the middle. We’ve got dual stereo headphone jacks. We’ve got the coolest mouse on the planet right here. All of the connectors are inside one beautiful little door here—the Ethernet, the USB stuff. Around the back, we’ve got a really great handle here. The back of this thing looks better than the front of the other guys, by the way.

iMac’s naming scheme has paved the way for many later products such as iPod, iPhone, and iPad. Today, the lineups have done countless revisions, including a flat-panel display design in 2002, added more components behind the screen in 2004, replaced white plastic to aluminum enclosure backed by black plastic, and so on.