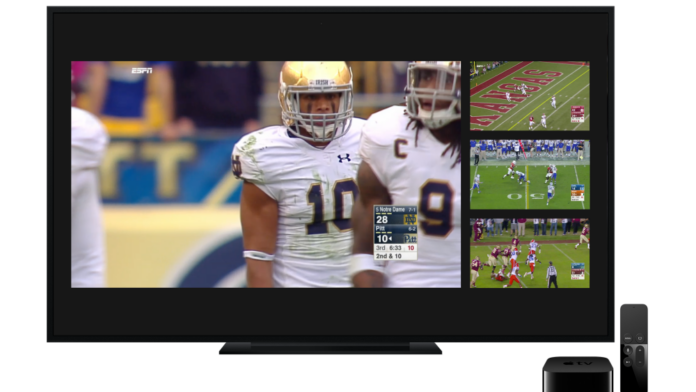 The college football season is getting closer and closer, and with that, many of you are probably wondering when and how you can stream college football again this season, without falling to a victim to cable and satellite companies.

Before we get into the nuts and bolts of how to stream college football this season, we will point out that ACC Network is launching on Hulu with Live TV, PlayStation Vue and YouTube TV on August 22, so be on the lookout for that.

The way we are going to do this is by going by streaming services and other apps that will give you a better idea of how streaming college football is going to happen this year.

Sling TV ($25 per month):  This is going to be the go-to service for most people. At only $25 per month, how could this not be it? On the Sling Orange plan, you will be able to get channels like ESPN, ESPN2, ESPN3 and the ESPN ACC Extra, as well as other sports channels like Stadium.

There is also Sling Blue, which will not have ESPN channels, but will have FS1 and FS2. However, FS1 is traditionally the spot where most of the college football games go. Sadly, as of this article, Sling TV, DISH (Sling TV’s parent company) and Disney have not worked out an agreement to bring back your regional FSN stations, so those will not be available for college football at least early in the season, and perhaps the entire season as a whole.

Both plans cost $25 a month each. Also, be sure to look into the Sling Extras to, as the sports one does contain channels like ESPN Goal Line, ESPN U, SEC Network and PAC 12 Network. As for local channels, don’t get your hopes up because Sling TV is not the kind of service that is going to have those. If. you live in a place like New York City or Los Angeles, then yes, your local stations will more than likely be on there, but for someone in a smaller area, the chances are slim-to-none.

YouTube TV ($50 a month): This is a service that is going to be pretty similar to Hulu with Live TV. The good news is that you will be able to get all of your local stations in most locations (99 percent of the United States).

As for the sports channels on the service, it will have the same channels as Hulu with Live TV.

PlayStation Vue and DirecTV NOW (will be called AT&T NOW TV in the future): The reason I put these two together is that they are pretty much the same thing. With that said, both of these services have about the same channels as the other. It all just depends on the plan you are going to go with.

Plans for PlayStation Vue start at $49.99 per month, but I believe that the best one to go to for sports fans should be the Core plan at $54.99 a month. This will have all of your sports channels and then some. the $49.99 Access plan does include some sports channels, but not channels like BTN, CBS Sports Network or NBCSN.

DirecTV NOW does have their plans too, with both the Plus ($50 per month) and Max ($70 per month) plans. However, the Max plan is going to be the best one for the money since it does bring in channels like ESPN U and ESPNEWS, as well as CBS Sports Network and BTN.

FuboTV ($54.99 per month): This service will not have any ESPN channels, but does carry all of the national and regional FOX Sports stations, NBC Sports stations, Big Ten Network and PAC 12 Networks.

Now, it’s not just the streaming services like the live TV ones that are going to be where all of the streaming action happens this season. There are a few apps that could come in handy for some of you out there and might make your college football watching experience a lot better.

ESPN: The first app is the ESPN app. This app has been known to have up-to-the-minute updates on games and sports news. However, did you know that if you sign into it with your TV provider credentials (cable, satellite and live TV streaming service), you can stream games directly from that app? It’s just like the ESPN3 website (includes games broadcasted on ABC too).

Additionally, ESPN has a service called ESPN+ that costs $4.99 a month and users can watch select games that ESPN has made available to watch.

Another cool thing with the ESPN app is that you can watch up to four games at once on one screen. The feature is currently only available on the Apple TV app, and would not work on a device like an iPad Pro or Mac.

FOX Sports GO: Again, this a lot like ESPN’s app but without the extra subscription for a streaming service. You can stream games and sporting events based on the package that you have from your cable, satellite or live TV streaming service provider.

This means that if you get regular FOX, FS1 and your regional FSN station that are all showing games at the moment, you can have them all on the same screen. But again, like the ESPN app, that feature is only available on the Apple TV app.

Pluto TV: The only reason we are mentioning this one is that they do still technically show college football through the season. On this streaming service, you can get a free live feed of Stadium, a channel that is also free OTA and will be showing a plethora of college football games this season.

The Big Sky Athletic Conference also shows their games on the service too, so if you are into that, then you will be able to watch those games on Pluto TV.

CBS All Access: Although it is known to be the primary home for CBS TV shows like Young Sheldon or Star Trek: Discovery, you can stream live college football games from CBS (not CBS Sports Network games) with a subscription to the service.

All of the streaming services mentioned here do have apps available on the iPhone, iPod Touch, iPad, Apple TV and can be streamed through a browser on a Mac.

We hope that this article clears up any questions you have about streaming college football this season. We also hope you have fun streaming the games this year too.