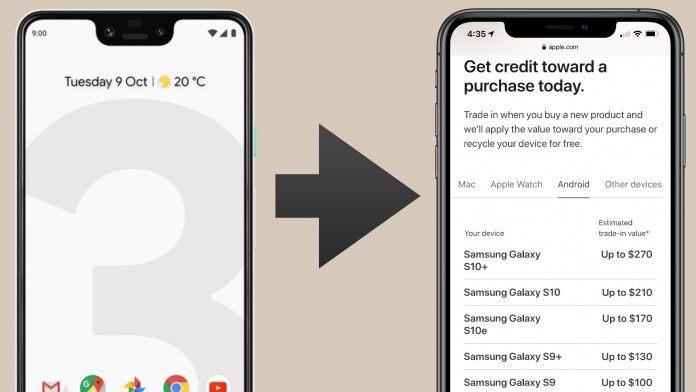 Today, Appleosophy discovered that Apple has quietly updated their trade-in website to reflect a new option allowing customers to trade in a select number of android smartphones for store credit toward a new iPhone.

While Apple previously offered its customers the ability to recycle Android products free of charge, this marks the first time in 5 years that Apple has allowed proportionately-priced trade-in options for specific android smartphones based on model and year released.

When Apple began its trade-in program in 2013, it partnered with specialized device buyback and trade-in company Brightstar to offer customers up to $175 in credit toward a new iPhone 5S should they choose to trade in their old iPhone 4S. Notably, the program only offered iPhone-for-iPhone trade-in options.

Even though Apple had a history of allowing customers to use older Apple-branded smartphones as a subsidy for a new iPhone, it wasn’t until March 2015 that Apple updated their Reuse & Recycle webpage to provide customers the option to trade in a handful of select android smartphones for Apple Store credit.

Apple’s short-lived 2015 Android trade-in program was limited to several smartphone models manufactured by LG, Samsung, Sony, HTC, Nokia and Blackberry, and was discontinued shortly after in 2016.

A quick web archive search revealed that Apple updated their trade-in program in May 2020 to offer in-store credit for the following Android smartphones: