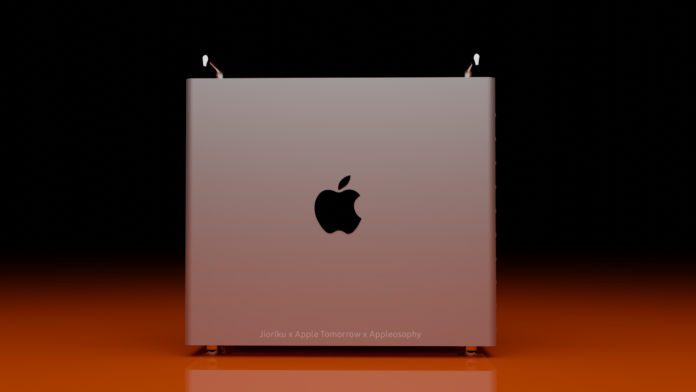 December is starting off strong for leaks that lead over into 2021, and this time around it’s no different! Recently, Apple made public a patent that details a smaller Mac Pro design with a new removable side panel design. This new design is set to be the first Mac Pro to receive Apple Silicon in addition to being the last in their professional lineup of Mac products that will get Apple Silicon as well.

In today’s article, I will be sharing the first details of this new Mac Pro as well as exclusive renders of an early design prototype. These very well done renders were done by Apple Tomorrow in collaboration with Me (Jioriku) as a way to protect sources and as well as getting the information out to the public. If you like what you see here be sure to follow Apple Tomorrow on his Twitter for more!

(Note: These images are the property of McGuire Wood and Apple Tomorrow. Any attempt to use these images without proper credit will be dealt with in accordance to United States copyright law. Images are allowed to be used as long as credit is given to both Apple Tomorrow and I.)

Right, with all of the crediting and legal disclaimers out of the way let’s get into the details! Firstly, this new design features the most drastic change to the original 2019 Mac Pro design: A removable side panel. The prototype that was shown to me featured a removable side panel with a latch design that was akin to the original 2010 Mac Pro mechanism. To use this design, you push on the front of the latch to lift the back, grab the back and then pull directly to the left and then remove the side panel with the gap created. Below is an image that I had created by Apple Tomorrow that showcases this latch mechanism.

Next up is the thing I believe most people will find important, the top IO of the new Mac Pro. As it is with the current Mac Pro this new model is receiving the same treatment with a power button and two Thunderbolt/USB-C ports. These ports have not been changed from the 2019 Mac Pro. Apple has not looked into the possibility of adding more/different ports to the top of this new Mac Pro. However, this should be expected as the design is not meant to be drastically different from the current design.

Lastly, we have the size comparative to the current 2019 Mac Pro. Comparative to what we have now, this new model is about half of the size of the current Mac Pro. This design allows Apple to more efficiently use material in the production process. Currently, we don’t have an exact or even ballpark price, but we do know that this enables Apple to sell this Mac Pro at a price more affordable to the pro-sumer market. This Mac Pro will most likely not have an Intel-based option and be exclusively Apple Silicon by the time it launches in 2022-2023. This new Mac Pro still features dual 10-Gigabit Ethernet ports next to the power supply, as well as keeping the ability to expand with PCI-E. Attached below are the final images of this article. They provide an up-close look at the new, smaller Mac Pro as well as a size comparison next to the Pro Display XDR.

As you can see, this new Mac Pro is shaping up to be an amazing little desktop that has power outclassing any current desktop chipsets for at least the next year or two. This opens a whole new class of desktop processing to Apple and I personally am excited to see where Apple takes this one!

I’d like to give a huge thanks to everyone who made this possible: The sources that I worked with, Apple Tomorrow for his absolutely amazing render work, and Holden here at Appleosophy for making all of the changes and fixing the image issues with this piece. This will be my last major leak of 2020, and here’s to ushering in a whole new year in 2021. Happy Holidays from Jioriku everyone!