There is a new bundle for those looking to get both Hulu and Disney+ bundled together for a cheaper price.

However, for consumers wanting to save money and be more specific in their viewing habits, there is now a bundle that includes just Hulu and Disney+. This bundle’s version of Hulu is the ad-supported one and costs just $9.98 per month. The only difference between this bundle and the other $13.99 a month one is the $9.98 a month version does not include ESPN+.

This has been discovered by a recent ad on Instagram by Hulu that shows the new bundle, its features and monthly price. Consumers can sign up for this bundle through the Hulu website now too. 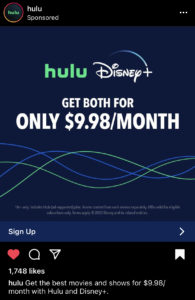 Hulu itself costs just $6.99 per month for the ad-supported version and $12.99 a month for its ad-free version. Both Hulu and Disney+ are available to stream on the iPhone, iPod Touch, iPad, Apple TV and Mac, and the two streaming services support SharePlay too.

Do you plan on signing up for this new Hulu with Disney+ bundle? Comment below or let us know on Twitter at @appleosophy.