Streaming during the summer is a great pastime for people trying to pass the time, as well as have family and friends movies and TV show nights. If anything, nothing is better than binging the television.

However, a recent ad that appeared on Instagram by HBO Max shows that all eight of the “Harry Potter” films will be removed from the streaming service and that subscribers will only have until Thursday, June 30 to stream the films. Once July comes, they will all be gone. 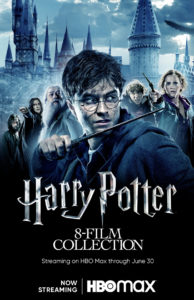 This also comes at a time where Peacock has removed all eight “Harry Potter” movies too. All of the films were removed from that service last month.

While there is currently not a specific reason for the removal of the “Harry Potter” movies from either HBO Max or Peacock, it is an aspect of the streaming industry where movies and TV shows sort of come and go from time to time.

For those looking to combat the issue, many online and physical retailers do have the eight-film collections available on DVD and Blu-ray. You can also get all of the films through iTunes and have them digitally for $79.99.

Yes, it could be seen as an expensive price, but it does make it so you would no longer have to worry about which streaming service has the entire set of movies.

After the movies are removed from HBO Max, the only Harry Potter-related items that will be available on it will be the first two “Fantastic Beasts” movies and the 20th anniversary “Harry Potter” special since it is an HBO MAX Original.

What are your thoughts on all eight “Harry Potter” films leaving HBO Max next month? Do you plan on binging them one more time before they are removed? Comment below or let us know on Twitter at @appleosophy.