What Happened at the March 2018 Apple Education Event

On Tuesday, there was the Apple Education Event where Apple talked about the current state of education, along with unveiling a few new products and services in the process. The event was held at Lane Tech College Prep High School in Chicago, which is the largest school in the Chicago public district.

For starters, Tim Cook went out and talked about the #MarchForOurLives protests from over the past weekend and how “technology has an important role in the classroom.” Needless to say that I don’t think anyone reading this would disagree with that.

Cook announced that Apple is working with CPS to teach coding to more than 370,000 kids across the Chicago school district. He also said that at Apple’s retail stores, students and teachers can educate themselves on how to do things such as learn how to be a photographer or about filmmaking, and also creating their own apps through their Today at Apple sessions, along with being able to schedule an appointment to learn those skills with a one-on-one approach.

During the event, it was announced that Apple had updated their iWorks apps, Pages, Keynote and Numbers. Pages now has the ability to makes books and that it works a lot like iBooks Author on the Mac. GarageBand and Clips were updated today as well.

As for what products were unveiled, there is a new version of the iPad that is basically an iPad for Education (or at least that’s what Apple is calling it). It has the specs and guts of the iPad Pro in it and now has Apple Pencil support.

This iPad is believed to be the replacement of the iPad 5th Generation that was released in 2017. The only differences between the two are the specs and that the new iPad has Apple Pencil support.

It starts at $329 for consumers and $309 for schools. Consumers and educators can pre-order today and it is set to be available this Friday and will be available in Apple Stores by Friday as well.

Another item that was unveiled at this event was the Logitech Crayon. It is a cheaper version of the Apple Pencil and starts at $49. It is said that it is going to work with the iWork suite and other Apple Pencil-enabled apps. The Logitech Crayon is set to only be available for education markets.

Classroom for Mac was also announced. It’s the same thing as the Classroom app for iOS but that Apple is now bringing this to the Mac. It will be available in beta form in June 2018.

The company unveiled a new app called “Schoolwork,” which will make it easier for teachers to hand out worksheets and assignments to students, along with making sure that teachers can check to see if the students have handed the assignments in and their progress in the class.

For students, it makes it easier to do and turn in assignments. Instead of handing out a physical worksheet to the students, everything will be handed out and done on the iPad.

Susan Prescott, the Vice President of product marketing and the woman who showed off this app, said, “It’s literally as easy as sending an email.”

The app also integrates other education-related apps into it and allows teachers to view how far the students are into the assessment and their progress within it.

Schoolwork is completely private. Prescott said that Apple does not have access to the class information and that no one else has access to it either.

“Privacy is integral into everything we do at Apple, not just for students and teachers, but for everyone using an Apple product.” The Schoolwork app is said to be coming out in June 2018.

Apple also released a new API called “ClassKit” that will allow for apps to be created and eventually integrated into the Schoolwork app system for teachers and students to use both inside and outside the classroom.

Prescott went on to talk about a new service called “Apple Teacher.” It is free self-paced online professional learning program.

Apple Teacher can be used to build skills, show progress and to get inspired. Teachers can earn badges and also get inspired by what other teachers are doing in their classrooms with their students. So far, there have over one million badges earned by teachers across the country. The service even allows teachers to integrate the Clips app into the classroom too.

Finally, Prescott announced a new program called “Everyone Can Create.” This program is designed for students who want to learn how to code. However, students can also learn about making music, video, photography and drawing.

Everyone Can Create can be previewed starting today. According to Prescott, more content will be coming this summer and it is hinted in the keynote that it will be ready by next school year.

To watch the March 2018 Apple Education Event keynote, go to Apple’s website or watch it in the Apple Events app on the Apple TV. 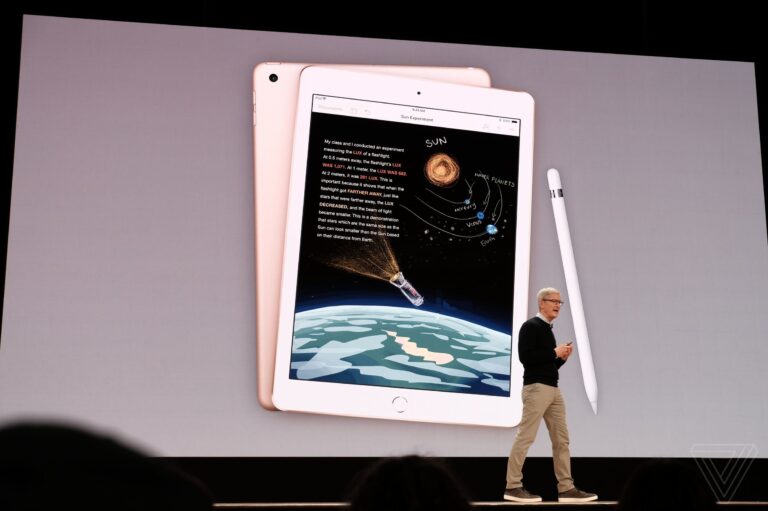 With people trying to save money on laptops left-and-right, is it still a good idea today to buy…