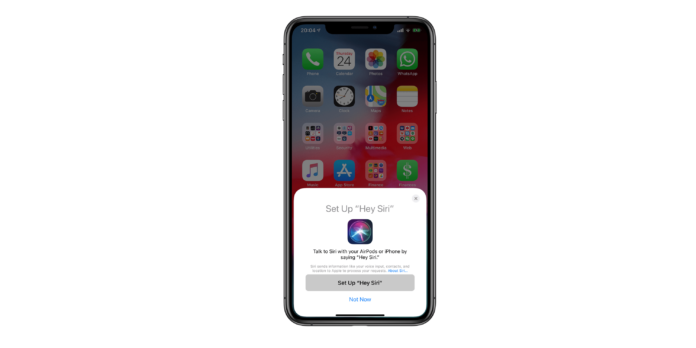 The latest iOS 12.2 Developer beta that Apple released today includes a reference to using “Hey Siri”, which allows you to summon Apple’s digital personal assistant with the keyword. First introduced with the iPhone 6s in iOS 9, it later came to mid-2018 MacBook Pro models and the new Retina MacBook Pro’s, and the HomePod smart speaker that Apple released in 2018, but notably missing – Apple’s AirPods lineup lack this feature.

The first generation AirPods models were released in Late 2016 alongside the iPhone 7 and iPhone 7 Plus when Apple removed the traditional 3.5mm headphone jack from their latest iPhone models at the time, citing “the courage to do something new that betters all of us”. Apple then released the $169 AirPods, which were the first truly wireless earphones that worked with Apple Watch, Mac and iPhone for a truly wireless experience between all of your Apple devices.

Setting up “Hey Siri” is inline inside the AirPods setup menu. This is likely enabled by a new W-series processor, which has the “brains” for the AirPods and allows the seamless connection that many people love about AirPods.

Since Apple put this feature inside a beta release of iOS 12.2, it is likely Apple will include this new feature in early 2019 after iOS 12.2 reaches a final release.