Editorial: One Year Later with my iPad Fifth Generation 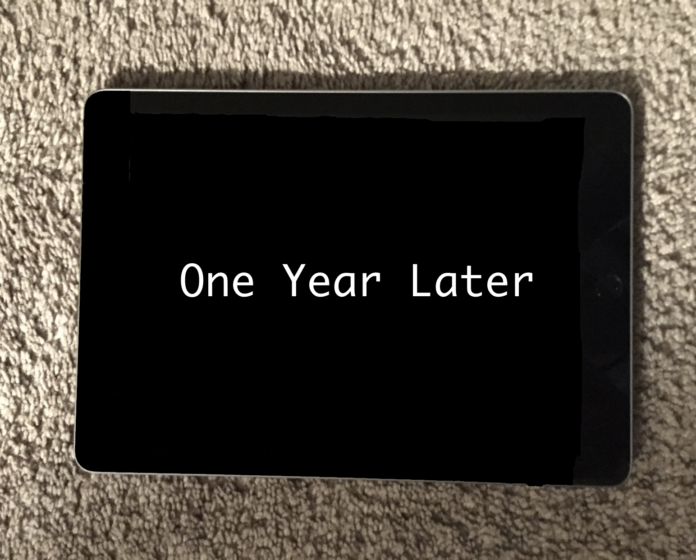 As of Sunday, I have now owned my iPad fifth generation for a year. I bought the iPad at Best Buy last year for only $250 for the 32GB version with my 2018 tax refund.

The point of this purchase was to replace my iPad Mini 2 due to its limited memory (16GB) and wanting a bigger screen to work with. One of the things that I used with both my iPad Mini 2 and iPad fifth generation this time last year was for textbooks. At my college last semester, I had one e-textbook on it since it was a lot cheaper than buying the physical textbook.

Obviously there was more to the purchase than that, but it was something notable. Another reason I purchased it was that I really wanted to have an iPad with a larger screen and have Touch ID. I make a lot of Apple Pay purchases, most of them coming from my Apple Watch and iPhone. However, there have been times I have made purchases from my iPad with Apple Pay and I am glad that I am able to do that right from that device.

Writing and blogging are things that are big in my life. When I wrote on my iPad Mini 2, I felt near the end that the screen was too small and that it was hard to type on. Whether I was using the WordPress app or Pages on that iPad, I felt like I needed something bigger. After all, I bought it when I was only 18 years old and at the time I was 21 years old, so there was good chance that my fingers may have gotten bigger over the years.

There was the other aspect of being able to watch TV shows and movies on a bigger screen too. I am not one for watching movies on an iPad unless I am traveling, but the Fall 2017 semester, I did watch episodes of 13 Reasons Why from Netflix that I downloaded before we hit the road. Yes, I was entertained and it did the job, but I do wish that I would have had a bigger screen to watch those episodes on.

Additionally, when I was in my college dorm the previous two semesters, I would put my iPad Mini 2 on my nightstand and watch some episodes of Last Man Standing or How I Met Your Mother from Hulu. This was good, but again, the screen never felt like it was big enough to do that.

Let’s also point out that the iPad Mini 2 was released in 2014 and the iPad fifth generation was released in 2017. That’s a lot of years in between and it was not just the screen size that improved. The speaker quality was improved as well, making it a little easier to sleep since I could make my speakers louder (if necessary) and quality of them was better too.

There were times when I would leave my iPad Mini 2 under the pillows of my bed or the nightstand and not even worry that it was dead. That changed with the new iPad purchase. I found myself blogging, taking notes in class, using social media on it and watching videos too. It was a device that would not replace my MacBook Pro, but enough that where I would not have to use my iPhone or Apple Watch in class.

One thing that I liked to do was do Day One journal entries right from my iPad Mini 2. But like I said earlier, I found it hard to type on since my fingers were getting bigger. With the new iPad, I had that bigger screen and was journaling fairly regularly.

As for any sort of case with my iPad fifth generation, I did have a cheap one that I bought through Target’s app (ironically with the new iPad using Apple Pay). That case lasted for a couple months, but I eventually bought an OtterBox Defender case for the iPad that I got for under $55 at Best Buy (with Apple Pay too, but purchased in the store with my Apple Watch).

Overall, it’s been an official year with this iPad and although it is not the sixth generation that was released 3-4 weeks later at Apple’s March 2018 education event and does not support the use of the Apple Pencil, I still like my iPad fifth generation. It does what I need it to and gets the job done right all of the time. There’s nothing I need more than that.