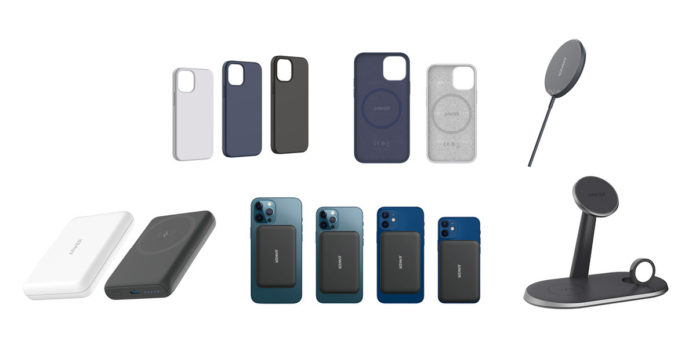 On Monday January 11th, Anker revealed their new lineup of accessories with MagSafe support for the new iPhone 12 lineup.

Anker’s Magnetic Series feature an assortment of products that take advantage of Apple’s MagSafe growing ecosystem. Among the accessories announced in this lineup, there are cases and wirelessly charging power banks, that stick directly to the back of your device.

The cases offer slim and elegant protection to the devices, featuring a ring of magnets similar to the ones inside the phone and Apple’s case lineup.

Besides being supported by Apple’s MagSafe Charger, there will also be a new alternative by Anker.  Unfortunately, it charges at half the speed. Around 7.5 Watts to be exact.

Another exciting accessory revealed inside the Magnetic Series is the Magnetic Wireless Power Banks. These can hold a capacity up to 10000 mAh, and with the magnetic ring it snaps together with the iPhone 12 lineup. These also feature a USB port to charge other devices with the power bank easily.

For those who are not using an iPhone 12, Anker has announced the PowerWave Go 3-in-1 Stand. Featuring an independent and detachable, wireless charging 10000 mAh power bank that works as a wireless charger for the dock and as a portable charging input. It also features an Apple Watch charging puck and a space for your AirPods to wirelessly charge.

As we expected, more and more companies are putting their efforts to appeal and develop new accessories inside the MagSafe ecosystem. Anker is one of the accessory giants that has just focused into these efforts, so we can expect more companies to do so.