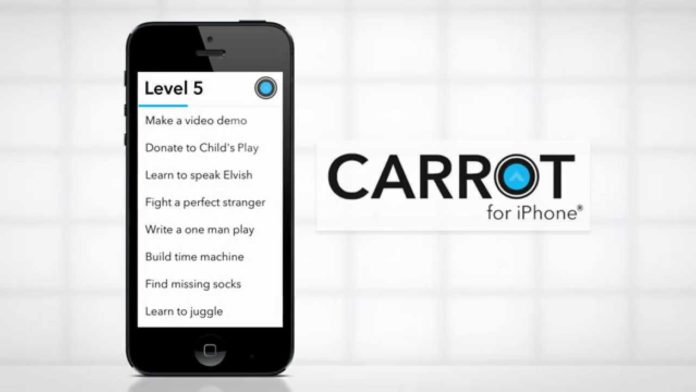 The feature image above may look old with the old iPhone on it, but trust us when we say this app is still relevant in 2021.

CARROT To-Do is an app on the App Store, made by the same developers behind CARROT Weather, that allows you to make simple to-do lists to get stuff done.

This could be a “honey-do” list or even one where you could list you goals for the day, week, month or year.

It sounds simple in concept and it is just that; a simple app.

The more you use the app, the more you rise through levels in the app. The levels don’t really do much. However, in my experience with the app, I found that it enabled me to eventually get notifications on my iPhone to remind me to use it or just remind me that it was there.

The issue that I have with the app is lack of iPad and Apple Watch support. It’s not an app that gets updated frequently, but with the way how iOS and iPadOS has been improved over the years, I would think the developers of the app would want to potentially add new features or a modified look.

Apple Watch support in particular is something I really want. You never know when you might need to add something to your grocery list but don’t have access to your iPhone.

A great example of this is when you are driving. Sure, you could wait until you get to a stoplight and take your iPhone out, but that’s not always safe. With Apple Watch support on an app like this, you simply hit the Digital Crown, find and open the app, voice your addition to your list, close it and move on.

Overall, CARROT To-Do is not a bad app. What it needs is some updated improvements, that’s all. It is available for $2.99 in the App Store.

With everything said here, I’ll give CARROT To-Do 2.5/4 stars. Yes, I have gotten my fair share of usage out of it over the couple of years that I have used it, but it’s an app that still has some work to do for other Apple devices. It is 2021 now after all.