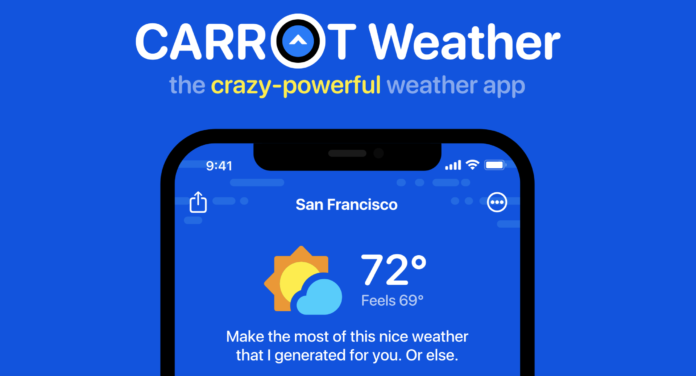 CARROT Weather has been around for a few years now and the fifth version of the app has been released to the public.

What this app is in its 5.0 build is a complete redesign and rebuild of the app, showing a modified interface with a modern look for its users.

A major aspect of this new app is that users can scroll down in the app. Having every bit of weather information on the main screen of the app has been one of its main features for years, but now it is getting away from that.

By scrolling down, users can get the most up-to-date accurate information such as the chances of precipitation and how much, air quality, when the sunrise/sunset will be and even what the windspeed will be overnight.

This all done through the new Cards feature of the app that appear when users scroll down on its iPhone and iPad apps.

Scrolling down in the app is the new true way to get the most information for what your weather will be like that day and week.

CARROT Weather is a free app in the App Store and is available on the iPhone, iPod Touch, iPad, Apple Watch, Apple TV and Mac.

For the sake of the 5.0 update, the app will be updated for its iPhone, iPod Touch, iPad and Apple Watch apps.

The app does have a free version and premium tier with more features. To see what those premium tiers are and how much they cost, click here.

What do you think of the new CARROT 5.0? Are you going to subscribe to it? Are you already a subscriber to it? Let us know on Twitter at @appleosophy.