On Tuesday, June 29, Apple released 22 new Apple Watch bands for the 2021 Olympics. But for me, I got the watch band for an entirely different reason. 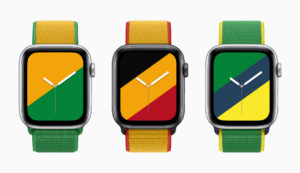 Personally, I could not care less about the Olympics. To me, like with most sporting events, they’re overrated. Sure, there was a time in my life when I was into a couple of sports and other than the video game versions of them, they get far too much attention.

With that said, I still had a reason to get this new United States band. One of those reasons was for the upcoming weekend with the 4th of July, also known as Amerca’s Independence Day. I mean, Apple currently has me getting the watch band on Friday, July 2. If the company is going to make it so convenient, then why not?

This watch band could also be used on important days like Memorial Day, Labor Day and local and national elections. Heck, I could wear for every Apple Event because I believe those are more American than most sports. Nothing says America like new technology in a thriving industry that tech is.

When it came down to the actual ordering of this, I did it through the Apple Store app. One aspect of the app (and the website) that I have always been a fan of is that I can “heart” products that save them to my favorites. It makes it conveniently accessible to me, and therefore, an easier purchase for me to make.

Once I found the watch band, it was just a matter of tapping on the “Check out with Apple Pay” in the app, selecting to pay with my Apple Card and then going through the whole process. It ended up taking less than a minute to do.

One last thing that I want to point out is that I would like to thank Appleosophy Weekly podcast host Brahm Shank for not only ordering one of these watch bands for himself, but that he provided the encouragement I needed to make this purchase.

I am looking forward to this United States watch band arriving at my doorstep and using it to celebrate the 4th of July and the weekend as a whole.

Be sure to stay tuned for a review of the product in the near future! Also, let us know on Twitter at @appleosophy if you have ordered this watch band or any of the other new ones that were released Tuesday.

Here is a potential case for your new Siri Remote

Those who love nature and the environment have another reason to not only go to an Apple Store,…