The company has recently begun accepting Apple Pay in its stores. This was seen by yours truly after I purchased a pair of shoes at the store in its Des Moines, Iowa location.

While this may seem like something that I could have just stumbled upon while in its stores, not only was the clerk at the store surprised that the company accepted it, but a couple of people on Twitter did reach out to me after I tweeted about it, saying that it was a fairly new development.

Went to @Dillards to buy a pair of shoes this afternoon and the worker there told me that I was the first person they have seen use  Pay there.

Good to know these firsts are still there today! #ApplePay #Dillards

After looking into this more, I did see that Apple Maps has updated it to show that the Dillard’s store near me does accept Apple Pay in it, but @ContactlessWiki on Twitter mentioned to me on Twitter that the update must have been made within the last few days since it did appear to be recently added to Google Maps, which now says the stores do accept Apple Pay.

Must've just activated within the last week or so. All their Google Maps listings now show they support NFC mobile payments. 😀

Since this update has been out on Twitter, @ContactlessWiki did tweet about Dillard’s accepting Apple Pay only in its stores.

The way how it works is similar to how Target initially started accepting Apple Pay in its stores a couple of years ago, with its four dots on the top fo the card reader screen. You’ll put your iPhone or Apple Watch over the card reader in that area where the dots are at, and then you should be able to get the payment to go through. The whole process is a matter of seconds. 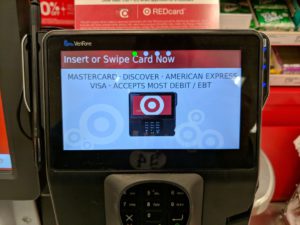 At this time, Dillard’s appears to only be accepting Apple Pay in its stores and there is no support for it on its website or app currently.

It should also be noted that those who make purchases with their Apple Card from their iPhone or Apple Watch will get 2% in Daily Cash on each purchase.

What are your thoughts on Dillard’s accepting Apple Pay in its stores? Comment below or let us know on Twitter at @appleosophy.

DEAL: Save $200 on select models of the iPad Pro via Best Buy

You have many choices today when it comes to streaming services and what you want to stream. Peacock…