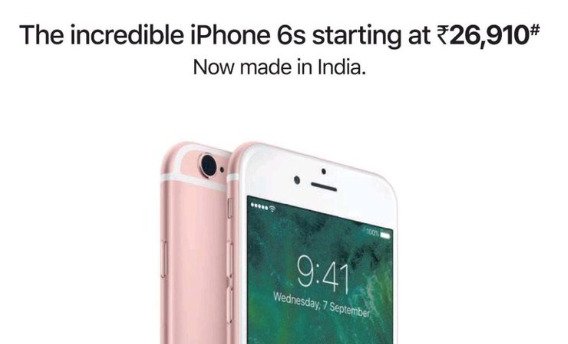 India is the second largest smartphone market in the world. But it is a market that Apple is finding hard to work with, the reason being the low per capita income which goes down to 25% of Indians get by earning less than $1.25 USD each day. Apple is still continuing to work on assembling some iPhone models in the country specifically for the local market so that the cost of the devices go down.

Value companies like Xiaomi have taken this as an opportunity to become successful in the market. As a result Apple started manufacturing in the country a couple of years ago. This helped the handsets avoid a $100 USD import tax and was in sync with Indian Prime Minister Narendra Modi’s “Make in India” campaign.

Varun Krishnan, a twitter user showed of an advertisement for the “incredible iPhone 6s” which is now “made in india”. Along with there are a few cashback offers for HDFC cardholders.

Just saw this ad , Apple is explicitly promoting made in India pic.twitter.com/OpjClRJAhs

Apple has been producing the iPhone 6s from 2017, with the help of their manufacturing partner, Wistron. It seems that the company is still keeping the device alive with a lower price of Rs.26,910. The iPhone SE and the iPhone 7 were also manufactured in India for the local market and there also has been news about the company tagging in Foxconn to start the production of the iPhone X in the country.