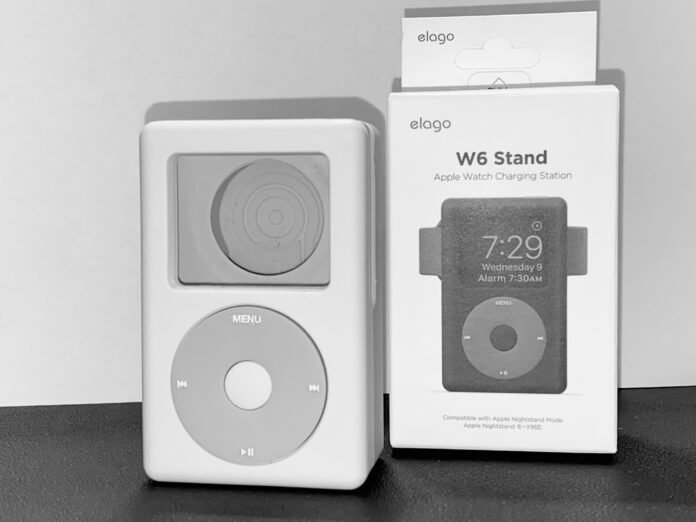 It is no secret that the design of Apple’s standalone inductive charging puck for Apple Watch offers little in the name of charm beyond a modern and minimalistic approach to charging. For those who desire a more unique and functional experience, the popular accessory brand Elago aims to offer a historically-inspired alternative with the advent of their new W6 charging stand for Apple Watch. At $14.99 the W6 Stand offers a sleek and affordable charging alternative for the Apple Watch.

Inspired by the classic design of the iPod Classic, the W6 charging stand presents an iconic ode to the famed MP3 player that Apple fans such as myself will surely appreciate. In fact, the stand comes in two variants; a white/grey option and a red/black option. The red on black model is clearly reminiscent of the limited edition iPod U2 that Apple shipped back in October of 2004. The W6 Stand is made from a flexible silicone mold that makes the charging puck and the Apple Watch itself easy to install. While the charging puck is cleverly hidden behind the rear module of the stand, the cord connecting the charger to the power brick is nestled in a small groove underneath. These design decisions by Elago offer a clean and elegant design that minimizes the appearance of wires.

While it may have offered me a slight sense of whimsical pleasure, I was disappointed to discover that the 3D buttons and mute-lock switch did not deliver tactile feedback despite their inviting appeal. Another possible concern is the fact that lint or dust may cling to the outer housing of the stand and prove difficult to remove. In my opinion, the nostalgic and detail-oriented design of the W6 Stand more than makes up for these minor concerns.

Aside from it’s classy vintage appeal, I found the functionality offered by the W6 Stand to be as equally compelling as it design. Device compatibility is not a concern since the stand is compatible with all Apple Watch models (Apple Watch 1st Gen & Series 1-5, 38mm, 40mm, 42mm, 44mm).

While many of us utilize our Apple Watch as an alarm clock, it can prove a bit cumbersome to pick up your Apple Watch to view the time, or to snooze an alarm by pinching the side button with two fingers if you are using only the included Apple Watch charger. Additionally, the Apple Watch is prone to damage since the alarm vibrations produced by the Taptic Engine are liable to cause the Apple Watch to fall off your nightstand or presumably any flat surface. The matte texture of the W6 Stand solves this problem by offering a secure grip that prevents the Apple Watch from vibration-related accidents. The horizontal placement of the Apple Watch in the W6 Stand, which leaves the Digital Crown and side button exposed along the top of the casing, also offers a more accessible one-finger press to snooze or silent one’s alarm. The downward placement of the speaker and microphone housing on the Apple Watch as it rests in the W6 Stand offered me piece of mind since any excess moisture or debris is likely to drain out of the device in this position. It is also important to mention that the W6 Stand offers a snug and precisely aligned fit for the Apple Watch which eliminates any confusion regarding whether or not the device is charging. This sense of security and ease-of-use is akin to the confidence that wireless charging pads for the iPhone inspire.

In conclusion, I recommend the W6 Charging Stand by Elago for any passionate Apple fan or anyone looking for an iconic and affordable way to charge & display their Apple Watch. It’s charming aesthetic, effective protection, and intuitive functionality offer a uniquely original accessory that is sure to be a fantastic companion for your Apple Watch.

Streaming dominates the way we watch our favorite TV shows and movies. Still though, in some cases, there are TV shows that are either not...
Read more
Apple

The people over at Best Buy are having one heck of a deal on Apple's 32GB 10.2-inch iPad eighth generation on Black Friday. Right now,...
Read more

Thanksgiving is officially over this year, but now we are opening ourselves up to Christmas and the specials and movies that come with it. Here...
Read more

Streaming dominates the way we watch our favorite TV shows and movies. Still though, in some cases, there are TV shows that are either not...
Read more
Facebook
Instagram
Twitter