It’s that time of year again. Or, month. This is the first year of Apple’s existence with 3 consecutive months of events, and a lot has been announced. Back in June, Apple announced their much-rumoured transition to their own in-house silicon chips in the Mac, and the new chip has finally been unveiled on November 10th. Titled simply as M1, this breakthrough chip brings an array of incredible improvements to the Mac lineup.

Overview of the Apple M1

The Apple M1 chip is the first chip designed specifically for the Mac. With upgraded performance, thermals, and power efficiency, it promises to unlock new technologies and experiences for the next line of Apple’s computers. “There has never been a chip like M1, our breakthrough SoC for the Mac. It builds on more than a decade of designing industry-leading chips for iPhone, iPad, and Apple Watch, and ushers in a whole new era for the  Mac,” said Johny Srouji, Apple’s senior vice president of Hardware Technologies. “When it comes to low-power silicon, M1 has the world’s fastest CPU core, the world’s fastest integrated graphics in a personal computer, and the amazing machine learning performance of the Apple Neural Engine. With its unique combination of remarkable performance, powerful features, and incredible efficiency, M1 is by far the best chip we’ve ever created.” (from Apple Newsroom). What previously needed multiple chips to be accomplished can now be run on a single chip, leading to improved integration and increased efficiency, as well as being the first personal computer chip to be built on the 5nm process.

Performance is where the new M1 chip absolutely shines. Despite Apple’s generic-looking graphs…

…they’ve made some bold claims, and it seemingly forecasts a massive boost in performance for Mac. With up to 3.5x faster CPU speeds and up to 5x faster GPU speeds compared to the last generation chips in the MacBook Air, the M1 chip delivers an exceptional performance as well as increased power efficiency. On the MacBook Pro, the chip can perform up to 2.8x faster than the last generation, with the GPU up to 5x faster as well. As expected, improvements also come to the refreshed Mac Mini, at up to 3x faster CPU performance and up to 6x faster GPU performance.

The new chips come with a multitude of other advantages, including: 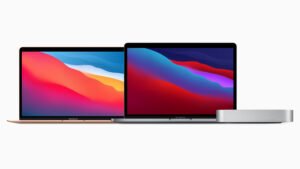 It’s been a big announcement, and the improvements have been even more extensive than expected. All that’s left to do is look to the future, where the 16-inch MacBook Pro is expected to bring even greater performance to the table with Apple Silicon. See you next year.

Apple has unveiled the new iPhone 12 Series at its October Event, introducing four new devices. Appleosophy has obtained the live wallpapers files for the...
Read more

Every year, I always make a plan to decorate my Christmas tree like everyone else in the United States. Needless to say, it is...
Read more

Apple has announced that from now till June 30 next year, 100% of the qualified proceeds of PRODUCT(RED) purchases will be transferred to the...
Read more
Facebook
Instagram
Twitter