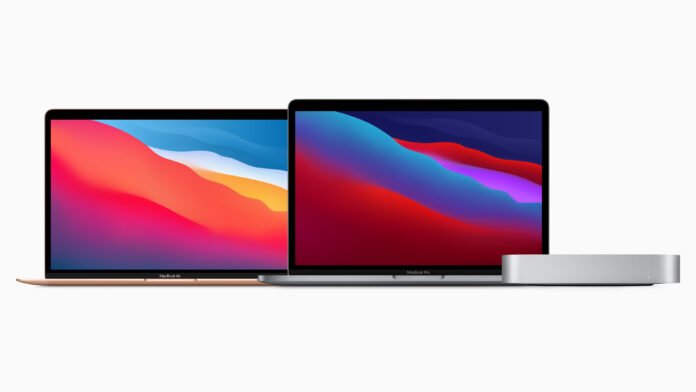 Apple during their “One More Thing” event on Tuesday announced their custom designed, Mac-specific M1 chipset. With claims of upto 5x graphical performance of the older intel chip and up to 3.5x performance, M1 chip promised big performance improvements over the previous models. Since then, the Geekbench results for the M1 chip in a MacBook Air has leaked. Premature benchmarks show the chip beating intel’s highest-end i9 processor found in the MacBook Pro 16-inch.

Apple claimed the M1’s high-power cores are the most powerful among all processors in the industry, but customers may have taken this with a grain of salt since all Apple showed were vague graphs and performance metrics. However, a leaked benchmark apparently from the MacBook Air puts all speculation to rest. The alleged benchmark made it to official Geekbench website.

The alleged benchmarks for MacBook Air [10,1] with Apple M1 claims to be from MacBook Air with 8GB of RAM. Single core score shows a result of 1687, highest single core score of all time on Geekbench browser, even beating the $50,000 Mac Pro. Multi-core performance shows a result of 7433, which beats out the intel core i9 in the 16-inch MacBook Pro. According to the Geekbench Browser, the M1 chip is clocked at 3.2 GHz at base frequency and has 4.00 MB L2 cache.

The leaked benchmarks show MacBook Air with M1 beating all other intel based notebooks from Apple. Important note: MacBook Air does not have a fan. However, 16-inch models with dedicated graphics cards are expected to be faster than Apple’s integrated graphics.

We can extrapolate the benchmarks of this MacBook Air and expect an improvement in the performance of the M1 when it is put in a laptop with an Active-Cooling setup like the MacBook Pro.
There are also other benchmarks available for the MacBook Air on the official Geekbench Website.

These benchmarks should be taken into consideration with caution as no MacBook Air reviews are out yet. The ambiguity among the results are yet to be verified since all CPUs across the lineup should have similar performance.

Apple has unveiled the new iPhone 12 Series at its October Event, introducing four new devices. Appleosophy has obtained the live wallpapers files for the...
Read more

At the "One More Thing" event back in November, Apple announced its new MacBooks with the M1 Silicon Processor. Apple has started with the...
Read more
Apple

Apple has seeded new updates to iOS 14.3 Beta 3 and iPadOS 14.3 Beta 3 to developers today, adding the ProRAW feature. ProRAW is an...
Read more

At the "One More Thing" event back in November, Apple announced its new MacBooks with the M1 Silicon Processor. Apple has started with the...
Read more

Apple is reportedly hinting at one more product to be released for this year after 3 virtual events in three months in a row,...
Read more
Facebook
Instagram
Twitter