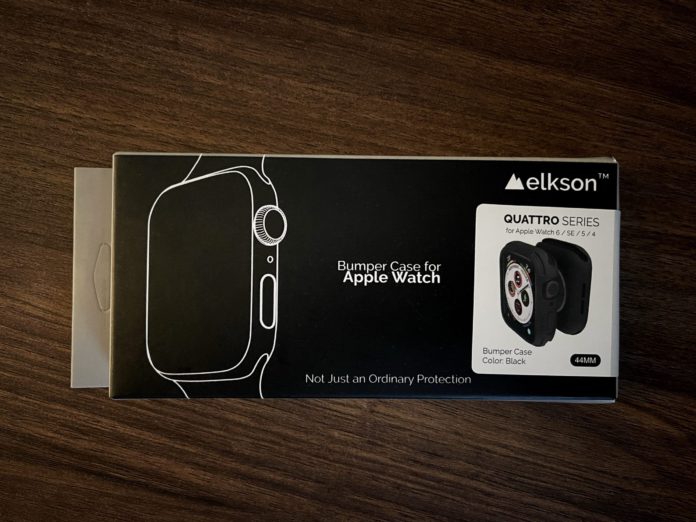 Founded back in 2018, Elkson is a premium Apple Watch accessory manufacturer based out of Canada with a knack for tasteful design and a relentless approach to problem solving. The folks over at Elkson were kind enough to send us their most popular product; the Quattro Series bumper case in Black.

Upon first look I noticed that the Quattro Series case has a uniquely robust feel. The sturdy yet slightly flexible military-grade TPU rubber finish offers a snug fit on my Apple Watch. Unlike other cases I have tested, installing the Quattro Series case was incredibly easy and the process did not make me feel like I might accidentally damage the watch.

Because the Quattro Series is a bumper case instead of the far too common all-in-one case and watch band combo, it is compatible with all of my existing watch bands which I find to be extremely convenient. I paired my black Quattro Series bumper case with Apple’s own Black Solo Loop for a stealthy look and a comfy feel. This combo allows me to enjoy the protective benefits that I’ve come to expect from other more traditional shock-resistant watches without having to use a stiff strap that digs into my wrist.

Precision-milled cutouts for the speaker, microphone, and Digital Crown give this case a sleek design and rugged appeal. Elkson even gave the Digital Crown a little more room to breathe by deepening its cutout slot just a bit which results in absolutely zero friction and lag-free scrolling when operating the Digital Crown. This is a thoughtfully crafted accessibility concern that many of Elkson’s competitors often forget to compensate for and it makes the Quattro Series bumper case stand out in a very nuanced way.

When purchasing an Apple Watch, active and adventurous users often opt for the more affordable & less flashy aluminum models which Apple previously dubbed “Apple Watch Sport”. However, an important concern when selecting an aluminum Apple Watch is that it features an ion-strengthened glass as opposed to the more durable and scratch resistant sapphire crystal glass that you will find on Apple’s $699+ Stainless Steel models.

The Quattro Series bumper case features a raised edge design that extends 1.2mm above the screen on all four sides to protect it from accidental impact damage. For me this instilled an increased level of confidence during fitness activities since I did not have to worry about shattering the screen on my Apple Watch if I accidentally bumped my wrist on a dumbbell or on the handles of the treadmill. While using the Quattro Series I happened to bump my wrist a few times on a quartz countertop and I could here a distinct “thunk” which was stark in contrast to the heart-stopping “clink” that would always send shivers down my spine anytime I accidentally hit my Apple Watch without a case.

Furthermore, the Quattro Series is screen protector and charger friendly. As a heavy user of Apple Watch, I oftentimes have to charge my Apple Watch multiple times a day, so it gives me peace of mind knowing that I will not have to remove the case every time I need to charge even if that means using a variety of different chargers to top off my Apple Watch.

All in all the Quattro Series bumper case is undoubtedly a high performance accessory offering increased protection and a stylistic approach to functional design. I’d be hard pressed to find any flaws with this case and I’d be happy to recommend it to anyone looking for an affordable solution for protecting their Apple Watch.

In fact, the Quattro Series retails for just $11.99 and it is available on Amazon in the U.S., Canada, U.K., and Japan. There is even a special promo offer in effect in which users who purchase two Quattro Series bumper cases will receive 10% off their entire order for a Limited Time Only.