Central America could be the next destination for Apple Pay support.

BAC Credomatic appears to be the next bank that is lining up to be one of the first financial institutions to begin that support for its customers.

This news comes as 9to5Mac reported that one of its readers, Juan, who stated that BAC Credomatic started testing Apple Pay support in Costa Rica “a few weeks ago.” However, the BAC Credomatic app that has this feature is currently in testing in the TestFlight app. 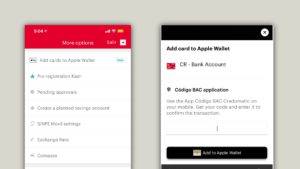 It has also been reported that MasterCard and Visa cards will be accepted when support officially launches.

In order for a bank to begin to get Apple Pay support, it must have Apple Wallet app support. As stated earlier, while the image above is not available to most users of the app and is only in testing through TestFlight, it is an indicator that the financial institution is just weeks or months away from launching.

What are your thoughts on BAC Credomatic and Central America getting support for Apple Pay? Comment below or let us know on Twitter at @appleosophy.

Last year, we made a prediction that Hallmark Movies Now could be making its way to Apple TV…