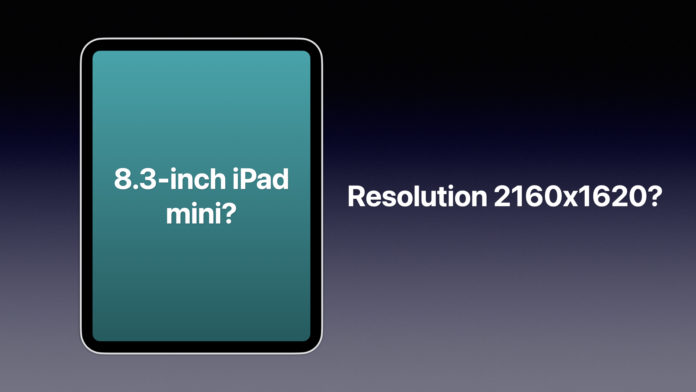 The iPad mini 6 has long been rumored to feature a larger display at around 8.5-9 inches across the diagonal. Now according to a display analyst, Ross Young, the next generation iPad mini will feature a 8.3-inch display. While that may sound a bit smaller than what we’ve expected, it all makes sense, and here’s why.

When Apple introduced the very first iPad in 2010, it featured a display that measured in at 9.7 inches diagonally with a resolution of 1024×768 pixels. Fast forward to 2012, Apple introduced the very first iPad mini with a display that measured in at 7.9 inches diagonally, and Phill Schiller who presented that tablet even mentioned that that number is super easy to remember as you can switch the digits. Even with a miniature-sized screen, Apple has maintained the same resolution as that of the widely-popular full-size iPad by increasing the pixel density. That way, you’d still get a true iPad experience when using apps optimized for the larger canvas that the full-size iPad provides rather than a scaled-up smartphone version on the app on other competing mini tablets that failed to compete with the iPad.

The following year, Apple updated the display for the mini to ‘Retina’ quality by doubling the pixel density as it did before with the full-size iPad which had a resolution of 2048×1536 pixels. Over the next few years, the iPad mini would have the same resolution as that of the full-size iPad until late in 2019 when Apple increased the size of the full-size iPad’s display to 10.2-inches with a larger resolution of 2160 x 1620 pixels. If Apple were to bring that same resolution to the future iPad mini and maintain the same pixel density of 326 ppi (pixels per inch), the length of the display would be approximately 2160 pixels / 326 ppi = 6.6 inches. The width would be 1620 pixels / 326 ppi = 5 inches. Calculating the diagonal by using Pythagorean’s Theorem would approximately be equal to 8.3 inches, which matches Young’s claim.

So it’s safe to say that the final display size would be around 8.3 inches for the iPad mini. Even with the larger display, we can still expect the iPad mini to follow suit of Apple’s latest design for the iPad, which includes thinner, uniformed bezels and no Home button. Other features we can expect are the A14 or A15 chip, the Smart Connector, as well as the USB-C port in place of the Lightning port for better accessory support. Now DigiTimes recently suggested that this upcoming mini will feature the mini-LED display, but I highly doubt this would happen really soon, and Young agrees, considering that the 12.9-inch iPad Pro is the only model that features the mini-LED display, and bringing it to the smallest iPad would drive the cost up, and Apple wants to further differentiate the mini from the Pro while keeping the price for the mini low.

So what do you think about this speculated display size for the iPad mini? Do you agree with my thoughts? Let us know in the comments below.

Early generation iPads are like Toyota Land Cruisers… they are solid and keep providing utility value. The latest innovations are interesting but really not that relevant unless the size / portability changes. A mini 6 will be a welcome must have