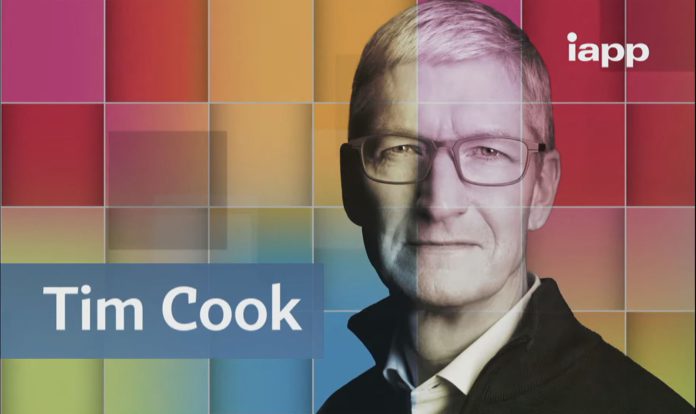 Cook told attendees that Apple is deeply concerned over privacy protection as well as sideloading of apps on the iPhone. Delivering his remarks on Apple’s commitment to protecting users from “data-hungry companies”, referencing rivals such as Meta (Facebook) and Alphabet (Google) by developing features such as App Tracking Transparency that gives users more control over their own data.

Cook also slammed politicians and policymakers who propose legal regulations such as in the U.S. and the European Union with its Digital Markets Act that forces Apple to allow sideloading of iPhone apps outside of the App Store:

“Here in Washington and elsewhere, policymakers are taking steps in the name of competition that would force Apple to let apps onto iPhone that circumvent the App Store through a process called sideloading,” said Cook. “That means data-hungry companies would be able to avoid our privacy rules and once again track our users against their will. It would also potentially give bad actors a way around the comprehensive security protections we have put in place, putting them in direct contact with our users.”

“If we are forced to let unvetted apps onto iPhone, the unintended consequences will be profound,” warned Cook. “And when we see that, we feel an obligation to speak up and to ask policymakers to work with us to advance goals that I truly believe we share, without undermining privacy in the process.”

Cook highlighted the company’s pride in its primary goals of privacy and data protection in the user base, stating that is a fundamental right; Inspired technology can make it positively protect users. However, he notes that it is neither inherently good nor bad:

“The fight to protect privacy is not an easy one, but it is one of the most essential battles of our time,” said Cook. “We at Apple are proud to stand alongside all those who are working to advance privacy rights around the world. As a company, we are profoundly inspired by what technology can make possible, but we know too that technology is neither inherently good nor inherently bad. It is what we make of it. It is a mirror that reflects the ambitions of the people who use it, the people who build it, and the people who regulate it.”

Finally, Cook says that he supports competition, noting that it helps innovation and that “good intentions” are the ideas behind it. However, he states that such actions would have “profound” and unplanned results.

The speech of Tim Cook was part of many keynotes delivered by many figures such as Microsoft President and Vice-Chair Brad Smith, Chair of the Federal Trade Commission (FTC) Lina Khan, and European Commissioner for Justice Didier Reynders. The summit was hosted in Washington D.C. and streamed online on YouTube: