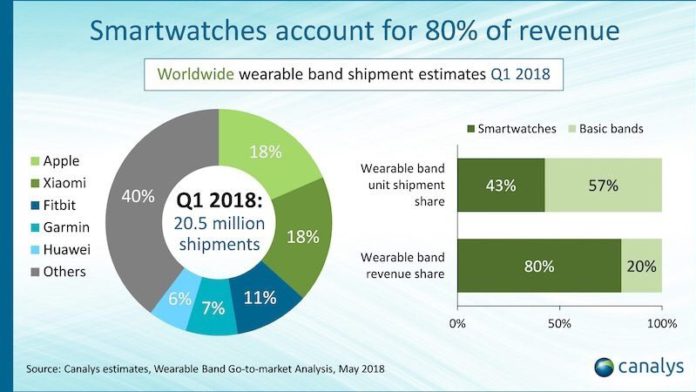 Since its launch in September, the Apple Watch Series 3, which supports LTE cellular connections, has completely dominated the smartwatch market and has helped Apple become the world’s largest watchmaker. Today, Canalys, a research company, shares new data showing that Apple Watch accounts for 59% of the globe cellular-enabled smartwatch market in Q1 2018.

According to Jason Low, a senior analyst at Canalys, the key to the success of the Apple Watch Series 3 is its ability to support LTE, allowing users to connect to the internet anytime, anywhere. So in 2018, Apple Watch shipments are increasing every month.

Furthermore, they adds that Apple has taken disadvantages of smart watches into a high-end products. The Android ecosystem lacks Apple’s competitors, until now, only LG Watch Sport, LG Watch Urbane, and Huawei Watch 2 have supported LTE. Plus that third-party app support and software updates are lackluster.

As for the shipments, Canalys believes that if the non-cellular network version is also included, the quarter may totaled 3.8 million units, which is the world’s most popular wearable device. In total, Apple accounted 18% of the smartwatch market. Other companies like Xiaomi and Fitbit are also sold an impressive amount of smartwatches.