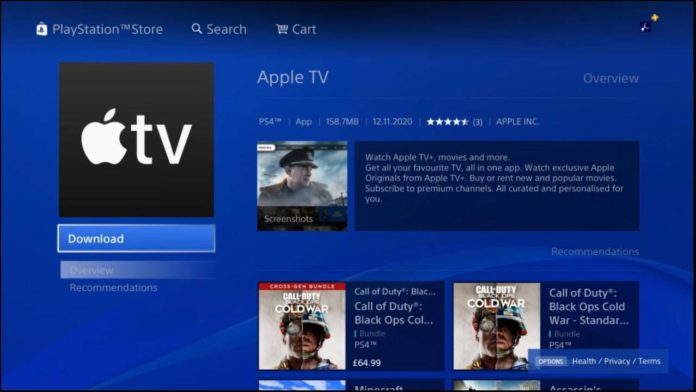 The “Vue” of the PlayStation is looking good from here.

Last year, it was announced that both the PlayStation 4 and PlayStation 5 were getting Apple TV app support, which did come through before the end of 2020.

Over this past weekend, I was able to try it out for the first time on my friend’s PS4 and the results were honestly quite impressive for what is still such a new app.

For starters, let’s talk about the fact that it’s great that the app is even available on the PS4. People like my friend, who use their PlayStation as their primary streaming device (along with gaming), really do get the benefits from this, as I would imagine other Apple users see the perks of having this app available on the PlayStation.

Another feature that I love is the fact that Apple makes it so easy to sign into the app.

When I did it for my friend, I scanned a QR code on the screen, which took me to Apple’s website that enabled me to sign in to it via Touch ID on the iPhone 8 Plus.

This is such a big deal because if you’re someone like me, you get tired of having to type passwords all the time and that my Apple ID password is pretty long, so if I can sign into it easier and have that simpler method be just as secure if not more secure, I’m going to be a happy person.

When it comes to post-sign-in, all of the content I have purchased through iTunes over the years was there as quickly as signing it. It just works and it’s all just…there!

However, what I liked the most is the fact that I still had access to my Apple TV Channels. This was major because my friend and his girlfriend have been wanting to watch the entire series of “iCarly,” and now they can do just that. Granted, I did own the complete series of the show before it all became available on Paramount+.

Having access to other services from Apple TV Channels is another nice benefit too.

When it comes to the overall performance of the app, there is very little lag in the app and it kind of just works. I’d argue it works better than the Apple TV Roku and Amazon Fire TV apps. In my experience, those apps are full of lag.

Overall, I would say that if you’re not looking to have an Apple TV HD or Apple TV 4K, the Apple TV app on the PlayStation 4 is an excellent substitute and is a true gaming device too, whereas gaming on the Apple TV device is not its primary function.

I’ll give the Apple TV app on the PlayStation 4/4 stars. It works better than I thought it would.

What do you think of the Apple TV app on the PlayStation 4 or PlayStation 5? Comment below or let us know on Twitter at @appleosophy.