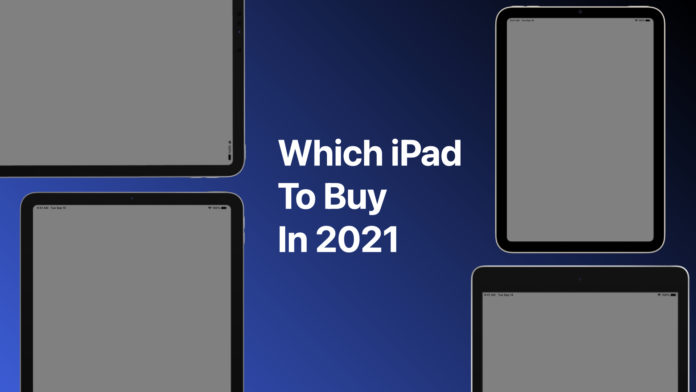 The embargo videos on both the 9th generation iPad and 6th generation iPad mini have been released today. With the upcoming launch of those updated models, the iPad lineup has become the strongest lineup of tablets ever from Apple. With so many models in the lineup, choosing between models can be even trickier. Thankfully, because there’s an iPad for every price point, that’s always an iPad for everyone. We’re going to explain which model would be right for you, so these purchasing decisions don’t have to be this hard.

The 9th generation of the standard iPad arguably brings a lot more to the table than last year’s upgrade. Besides jump from the A12 chip to the A13, its 10.2-inch display now features True Tone technology, which means this technology is now standard on every iPad model as of today. The massive improvement from 1.2MP to 12MP for the front camera (now ultra wide) now supports Center Stage, originally introduced with the most expensive iPad Pro.

Because of the same tried and true design for this model, accessories for older models will most likely work with this model, including the Smart Keyboard and first-generation Apple Pencil since this model still retains the Lightning connector as well as the headphone jack.

Ultimately, the most important feature for this model is the price, which starts as low as $299 for students, and the value gets even better with double the storage. All of these features make this model the best bang for you buck, and it’s safe to say it’s the iPad for the rest of us.

The iPad mini is in many ways a smaller version of the iPad Air as the smallest tablet receives the most massive upgrade to the smallest model yet. The company has maintained the same dimensions, but increased the display size to 8.3 inches that goes almost edge-to-edge. The new iPad mini is now more versatile than ever thanks to its USB-C connector, so you can plug in a wide plethora of accessories such as storage drives and monitors. This new design means that it will work with the much improved second generation Apple Pencil, where you can magnetically attach it to the right side of the iPad mini for automatic charging, and it’s always read for you to jot down your best idea.

You’ll see all of the features the mini has borrowed from its bigger brother, but with additional features. Thanks to 5G and Center Stage on the front ultra wide camera, this iPad mini has become every more capable with features that were exclusive to the Pro models. It’s also worth mentioning that this tablet now has an LED flash next to the rear camera. Given its small footprint, you could say that it’s more socially acceptable to take pictures with an iPad this size than a larger one.

With a starting price of $499 (consumers), which is a $100 increase from the last generation’s starting point, the iPad mini is now a great option again for those who reconsider a smaller tablet. It might be well worth the price given all the new features it packs in.

The iPad Air that was introduced last year is a cheaper version of the 11-inch iPad Pro in many ways. Not only does it feature a slightly smaller 10.9-inch edge-to-edge display, but also brings the same iPad Pro design/size that will work with accessories designed for the 11-inch iPad Pro such as the Magic Keyboard.

However, because the rest of the iPad lineup got updated this year, this model has yet to be updated with features found on the rest of the lineup. This includes 5G, Center Stage, and an LED flash – all of these have yet to make their way to the iPad Air.

With a starting price of $599, although it’s $200 cheaper than the iPad Pro, it doesn’t bring that much value anymore when it comes to features. Therefore, it’s imperative to wait a little bit longer for a hardware update if you have your eyes set on this model.

Last, but not least, the iPad Pro is the flagship model in the entire iPad lineup since they’re the first models that feature cutting-edge technology across many areas that will eventually made its way to its lower-end siblings. With the power of the M1 chip found in the Mac, the iPad Pro is a beast when it comes to performance. With both the 11-inch and 12.9-inch models, they provide the best display technology in the entire lineup with ProMotion and mini-LED on the 12.9-inch model. The addition of Thunderbolt 4 brings much more versatile with higher-end accessories that require faster transfer speeds.

Its powerful hardware is still held back by its limited iPadOS software. While we got nice improvements to multitasking found in iPadOS 15, we still don’t have real Pro apps yet such as Final Cut Pro or even real multi-display support. With a starting price of $799 (11-inch) and $1099 (12-inch), you’d really have to consider if all of those high-end features are really worth it to make the most out of its value.

With all of the models covered, here’s what you should consider for your next iPad. If you just want an iPad, don’t care about a modern design, still care about a headphone jack, or still have accessories that work with the 7th/8th generation iPad, go with the standard iPad, as it provides the best bang for your buck. If you want the most portable and smallest tablet or care about 5G, go with the iPad mini. With all of the new features found in other models, it highly recommended to wait for an update to the iPad Air. If you can really take advantage of the following: mini-LED display, larger internal storage, Thunderbolt accessories, the iPad Pro is your only option.