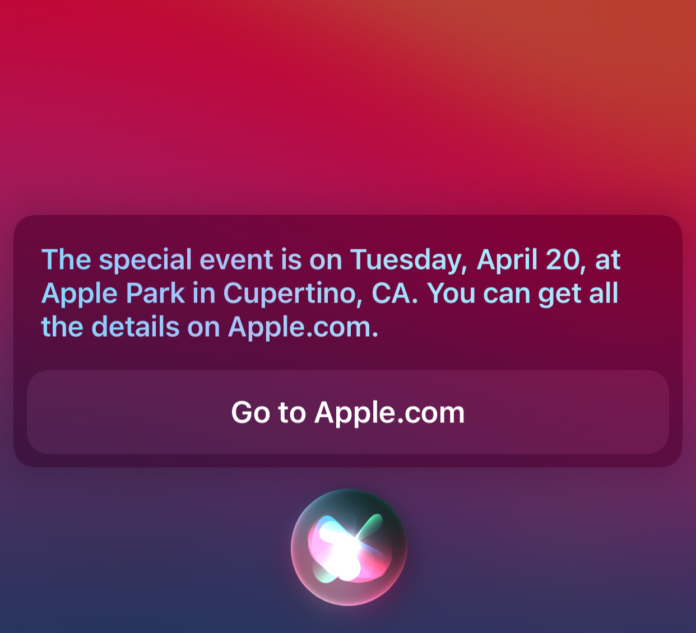 Siri: “The Special Event is on Tuesday, April 20th, at Apple Park in Cupertino, CA. You can get all the details on Apple.com.”

Apple has finally revealed their next most Anticipated Apple Event through Siri.

What has been going on recently?

There were several speculations of a possible March Event and popular Leaker & Founder of Front Page Tech Jon Prosser (77.2% Track Record according to AppleTrack) along with Kang with a very high track record (97.8% according to AppleTrack) said that the event invites will be sent out on March 16th for the event on March 23rd. However, the March Event wasn’t annou nced and there were speculations of an April Event. Jon Prosser then said that the event will be held in April.

In the last 10 years, Apple didn’t host an event in April. The last time they had an event in April was on April 8th 2010, announcing iPhone OS 4. In the Midst of this speculation, WWDC ’21 was announced which is expected to bring iOS 15, iPadOS 15, watchOS 8, tvOS 15, and macOS 12. The first developer betas are expected to be released on June 7th. People in the Apple Community were confused as to whether the April Event would take place or not. Although, Apple has announced WWDC before a Special Event earlier as well, but this year couldn’t get any more confusing! March has also seen several product discontinuations, including the iMac Pro, HomePod, and the 512GB & 1TB variants of the entry level 4K iMac 21.5 inch. There have been multiple reports saying that the new iPad Pro with Mini LED Displays are coming in the first half of 2021. According to Jon, Apple Stores are also preparing for some kind of a Product Launch towards the end of Next Week Heard first on the Genius Bar podcast hosted by Jon Prosser & Sam Kohl. Today, Siri has revealed the dates and location of the next Apple Event to be on Tuesday, April 20th at Apple Park in Cupertino, first spotted by MacRumors editors and readers.

This event is expected to bring the highly anticipated iPad Pro with Mini LED which has been confirmed by multiple reports, one of the most rumored product since 2019 and was confirmed in an Apple Support Video on April 2nd, 2020, first spotted by Redfruit Media Vice President Pururaj Dutta. The possibility of AirTags being announced at this event is very high as Apple has opened up its Find My Network to support 3rd Party Trackers. The rumored iMac Redesign with the powerful M1 chip & AirPods 3rd Generation are also expected at this event.

When will it be officially announced?

The event is expected to be announced & press invites are expected to be sent out today anywhere between 10 a.m. PDT TO 1 p.m. PDT with the event image and tagline giving us hints on the products expected at this anticipated event.

This is finally happening readers! I’m extremely excited to see these products finally coming out after months of anticipation. How excited are you? Let us know in the comments or tweet us at @appleosophy. Make sure to stay updated on the latest Apple News on Appleosophy and follow us on Instagram & Twitter at @appleosophy.